One Easy Fix for Delicious Cooking: Artisanal French Olive Oil. How to Select the Best 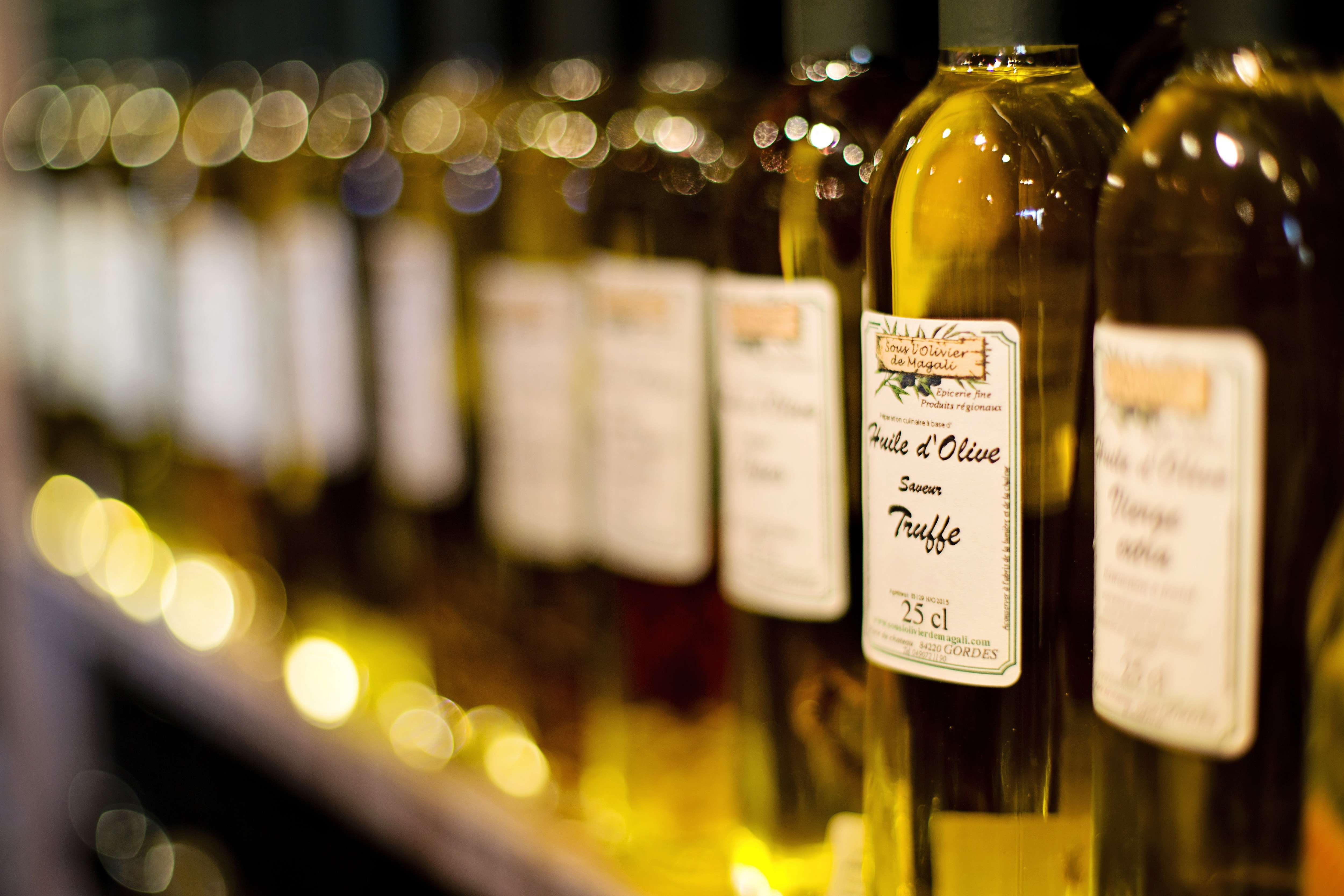 For a long time, I thought the olive oil I was buying in the supermarket here in France was terrific. Then I had two surprises:

When I read the label in detail there was nothing that said the olive oil was actually from France! The fine print stated the oil was from the European Union and outside the European Union. So basically, it was from anywhere in the world! I felt tricked.

Well-known brands from Italy sold in US supermarkets revealed a similar situation a few years ago which shocked US consumers: only a portion of what was in the bottle was from Italy. Mass-produced brands turn to these alternative sources because the olives are cheaper (and often of lower-quality).

So, if what you have in your kitchen is olive oil purchased from the supermarket, it’s probably a poor imitation of what you could be getting if you bought a really good artisanal one.

The second surprise came when I started going to gourmet food fairs in France:

I met the people who were actually making their own olive oil. It tasted much better than anything I found in the supermarket. Sure, the price was higher (the equivalent of a week of macchiatos at Starbucks), but so was the taste and quality. An added benefit: I knew exactly where the olives were grown and pressed, and had met the people who did all the work.

The first artisanal olive oil I purchased was from the Moulin Paradis. Mr. and Mrs. Paradis had a stand at a Paris food fair and would always take the time to explain how they made their oil, its specific characteristics and insist I taste it.  It’s a real family affair: today the two sons have taken over,   jazzed up the label a bit from their parents’ version, and won some awards in olive oil competitions.

French artisanal olive oil tastes so much better than the brands sold in grocery stores that once you taste it you’ll look forward to eating your vegetables. A meat-and-potatoes friend did: his wife couldn’t get him to eat more vegetables even though heart disease ran in his family. When he tasted a fantastic artisanal olive oil from La Vallée des Baux, suddenly he looked forward to his tomato mozzarella salad.

At home, I rotate through different high quality French artisan-made olive oils. As with walnut, pistachio, hazelnut, or almond oils, I use them as finishing oils, adding them to dishes before serving. (I have a lower-priced, organic olive oil I use for cooking). They’re so good they make any salad, vegetable or pasta taste out of this world.

As a result, I go out to average, everyday restaurants a lot less than I used to. I remind my husband when we’re served a salad with a so-so vinaigrette: “We have better olive oil at home.”

France is a much smaller olive oil producer than its neighbors, Spain and Italy. Vineyards and vacation homes replaced many olive groves. However, those olive growers that remain produce a delicate oil for which France is becoming known.
That delicate but complex aroma is a nice alternative to stronger oils found in other countries. You’ll definitely look forward to eating your veggies when you use it.
Though small, 90% of French olive oil production is in the “extra virgin” category, the highest quality grade. There is relatively little low-grade production. The extra virgin grade indicates that the oil is produced only by physical means – no chemical treatment has been used – and has a desirably low acidity level of less than .8%.

Here are several other reasons why buying a high-quality, artisan-made French olive oil is a good choice. 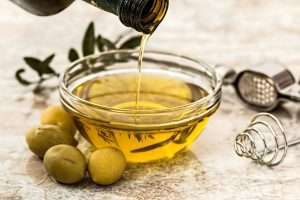 -How to be sure you’re choosing the right French olive oil?

Look for these 3 things:

Olive oil is similar to fine wine and great coffee in that its origin is one of the factors that influence its great taste.
In the European Union, it’s mandatory to mention on the label the origin of olive oil. It indicates both the origin of the olives and the production location of the oil.
However, that doesn’t mean a consumer is well-informed: Lower-priced olive oils sold in supermarkets are often a blend of oils from various countries.

In order to know that you’re getting high-quality olive oil, it’s better to buy a product labeled as being from one of the AOC/AOP regions. These “appellations” guarantee the link region-climate-“know-how” of the product.

There are around 100 AOP appellations in Europe of which Italy has 42, Spain has 26 and France has 7 plus 1 AOC.

The AOC is “Provence.”

Some of us prefer red wine, others white. So it is with olive oil: everyone has their preferences among the different taste categories.

In France olive oils are classified into the following categories:

These oils come from olives harvested several days before their full maturity when the color is turning from green to mauve. They are often among the best because they have more aromatic qualities and are higher in healthy polyphenols than other olive oils.

Aromas and tastes that are predominant in this category are vegetal, herbaceous: fresh-cut grass, hay, artichoke, red pepper, and green fruit, and green tomatoes. There can also be a presence of “ardence” and bitterness.

Oils from this category are from olives harvested when they are black and fully ripe. Their flavor is “softer,” with little bitterness or ardence. Prominent aromas are almond, red and yellow fruit, linden tree, or floral aromas.

This category indicates an old method (or “à l’ancienne”) used in which a controlled fermentation of matured olives is part of the oil-making process. This technique produces an oil with a rich creaminess and unusual notes of cacao, mushrooms, and forest undergrowth. It differs from the first two categories because the fruité noir olive oils do not have a fresh fruit character or a vegetal aroma.

However, any fermentation, according to European legislation, is considered a fault. Therefore this type of oil is classified only as “virgin” and does not have the superior qualification of “extra virgin.” Even so, that doesn’t diminish its intrinsic qualities appreciated by amateurs of this “à l’ancienne” production method.

One way in which olive oil differs from wine: it does not get better with age. The more it is exposed to heat and light, the more it breaks down, losing its taste and nutritional qualities and eventually becoming rancid. Its optimal flavor isn’t maintained beyond the expiry date.

The expiry date in France has several terms: formerly it was called (literally) the Limit Date of Optimal Utilisation, or DLUO. Now it is called the Date of Minimal Durability, or DDM. This date is calculated from the date the oil is bottled and not the date of harvest, as you might think.

This is where buying a higher quality olive oil than what is sold in the supermarket has its advantages for the consumer:

Many olive oils sold in supermarkets are a mix of oils from different harvests: for example, you might have in one oil 15% of a 2015 harvest, 30% of a 2016 harvest, and the rest from a 2017 harvest. And the expiry date is calculated from the date all those oils were put in that one bottle!

An average expiry date is usually 18 months after an oil’s bottling if the oil has been kept in optimal conditions: away from light and heat. (I store mine in a dark bottle in a cupboard far away from the kitchen stove).

The only real guarantee a consumer has is the date of harvesting of the olives that make up that particular olive oil – and that information is only displayed on bottles of high-quality olive oil.

-How do you know which one to choose?

That depends on your individual preferences. To find that you need to:
*try different oils
*shop at a store that allows you to taste the oil before buying
*when you’re served an olive oil you like (such as at a restaurant or someone’s home), ask for the name and any information they can give about it.

Most high-quality olive oils are not found in supermarkets. You deserve to get what you pay good money for, so look elsewhere. More reliable sources are specialty stores and online shops.

1. Olive Oil Lovers – They have a tasting kit to get you started and seem very serious in their sourcing of high-quality oils. (https://oliveoillovers.com)
2. Zingerman’s – This is another online supplier I would try if I lived in the U.S. They have several delicious high-quality French olive oils. (https://www.zingermans.com)

Do you cook with olive oil? Have you tried French olive oil? If so, what did you think? Let me know in the comments below.